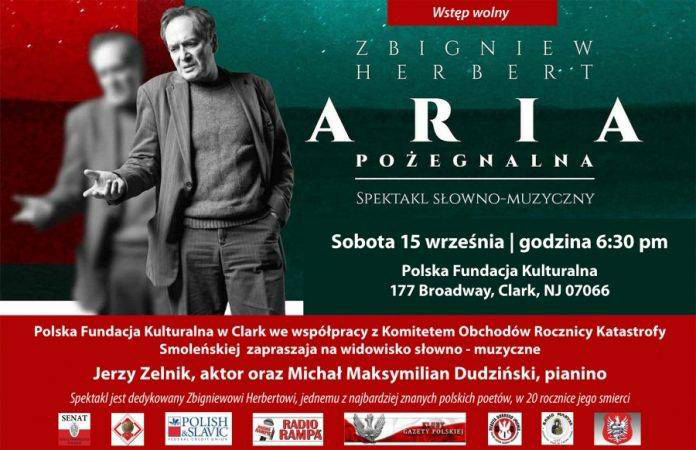 Farewell Aria "performed by Jerzy Zelnika (recitation) and Michał Maksymilian Dudziński (piano). The Event Was created on the occasion of Zbigniew Herbert's year for commemoration 20. Anniversary of his death. The screenplay and director of the performance is Jerzy Zelnik. In The program m.in: "Brewiarz",…

National Day of Remembrance of Soldiers

[Vc_row] [Vc_column] [Vc_column_text] On March 3, 2019 in Trenton, New Jersey, a central celebration of the National Memorial Day of the Remembrance Soldiers on the east coast was held. For the time being, the Smolensk-Katynski Committee of the American Częstochowa in cooperation with the Association of Veterans of the Polish Army-District 10 and the Association of Memory organized celebrations commemorating those who did not determine in battle and were Murdered by Communist executioners for his Homeland during the SECOND conspiracy. The Meeting began with the Solemnist Mass. In the church called St. Jadwiga, who celebrated the pastor, priest of Kanonik Jacek Łabiński. Honorary Guests were: Deputy Attache ds. Defence-Col. Michał Sprengel, deputy consul of POLAND in NY-Mateusz Gmura, ZG SWAP represented the executive director of the SWAP Foundation Andrzej Maciejewicz, Bolesław Plewa and Wiesław Wierzbowski-activists of Solidarity from the years 80 and Zbigniew Wrzos Kom. Honorary Pl. 12 SWAPPING from Philadelphia. The following SWAP establishments participated in the celebrations: PL 81-Trenton-Kom. Stefan Radgowski, Pl 36-Kom. Grzegorz Głowacz, pl. 12, com. Tadeusz Guzik and Auxiliary Female Corps of Pl. 36-President-Bożena Jaworska. Representatives of other patriotic and independent organizations were also Present: Kadeci Pułaskiego (kom. Stanisław Bańkowski) The Clubs of the Polish Newspaper, the Families of Radio Maryja, the Reduta of the Good Name and numerous inhabitants of Trenton, Philadelphia and the surrounding area. In his seration, the priest, Jacek Labiński, mentioned the martyrls of Unshakable Soldiers during the period of the PRL and inhumane treatment of them by bandits in Polish uniforms. At the end of the Mass. The Memory Appeal has been read. Tadeusz Antoniak from the Smolensk-Katyn Committee, together with Ewa and Grzegorz Tymiński from the Association of Memory, held a Market ceremony for successive sponsors of the Monument devoted to the Unwavering Soldier, who stood in Of the American Czestochów in 2016. The Ryngraphs were received by: Wojciech Kaniewski-Windows co-owner, Jolanta Chojnacka-Smolensk-Katyn Committee and Club GP Philadelphia, Wiesław Wierzbowski-KPA and GP-Boston Club and Szymon Moskal-Polish Legion Motorcycle Club. At the beginning Of the ceremony Tadeusz Antoniak recalled that the biggest sponsors of the construction of the statue of the works of Bozena and Andrzej Praszczyków were: Ava and Adam Bak, the Polish Slavic Federal Credit Union, the Association of Veterans of the Polish Army-District II and Foundation. At the end Of the Mass, the delegation filed a wreath under the statue of Blessed Father Jerzy Popiełuszki. After the ceremonies in the church, Commander Toni Płotka invited all gathered to the headquarters of the facility 81, where the official occurrences of the honorary guests took place. They All insided on the importance of memory and worthy treatment of the heroes who were in a time rightly gone to oblivion. Then, a historical lecture took place, which was delivered by Grzegorz Tymiński. He spoke of the role of Prof. Krzysztof Swagrzyk in finding the remains of the victims in the places of the Forge. Part of the lecture devoted to presenting the silhouettes of our heroes. Tadeusz Antoniak recalled that on the last Monday in Warsaw in the National Philharmonic took place Gala Gazeta Polska, on which Prof. Krzysztof Szwagrzyk received the prize of the MAN of the YEAR CLUBS of the POLISH NEWSPAPER (voted more than 460 GP clubs around the world). This year, the honour to read the Laudation and award ceremony was made by the representative of the GP Club from Philadelphia, Anecie Antoniak.  At The meeting in the headquarters of the Varans, the IPN exhibition "Headquarters-the national pantheon under the cemetery wall" was also presented. The Exhibition is a summary of the history of the Accommodation, collotically called the Link, and the research work carried out here in the years 2012 – 2017 by the IPN team headed by Prof. Chris. [/vc_column_text] [/vc_column] [/vc_row]

Event was held on SEPTEMBER 30, 2020 CLICK for More information