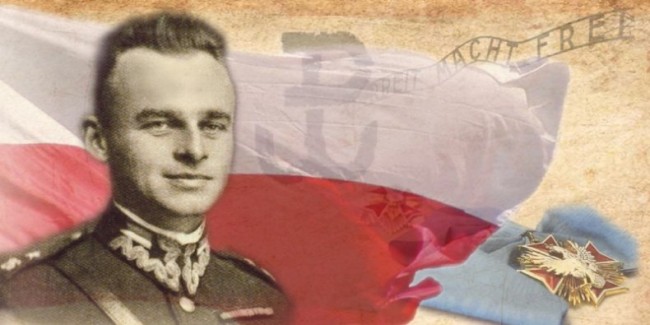 Witold Pilecki was murdered in prison at UL. Rakowiecka in Warsaw. He was a Polish officer and member of the Polish Underground State, the only voluntary prisoner of the German Nazi Concentration Camp, and the author of the so-called. Pilecki reports. Witold Pilecki served in the National Army and participated in the Warsaw Uprising.

After the war, he continued to work on the creation of Free Poland – in 1947. He was arrested and tortured by the authorities of the Soviet Union, after which he was judged and executed in 1948. After Poland regained its independence, it was rehabilitated by a judgment of the Supreme Court in 1990, receiving the rank of colonel of the Order of the White Eagle. British historian Prof. Michael Foot called Pilecki One of the six bravest men in the resistance movement of World War II.

Witold Pilecki presented to the authorities of the Polish Underground State the idea of entering the Nazi concentration and extermination camp Auschwitz-Birkenau. Pilecki’s Task was to gather information about the conditions prevailing in the camp and transfer them to the outside world. During his stay in the camp, Pilecki also founded the Union of Military Organization, which was supposed to prepare the uprising and Liberation camp. After escaping from Auschwitz, he produced reports documenting Nazi Germany’s crimes he witnessed.

The Reports were forwarded to the Allies and together with the actions of Jan Karski are the world’s first source of the Holocaust. “What humanity can say today, this humanity that wants to prove the progress of culture, and the 20th century to put much higher than the past centuries. Whether We, the people of the 20th century, can look at the faces of those who once lived and — a funny thing — to prove our superiority, when, in our time, armed mass destroys the non-hostile military, but entire peoples, vulnerable societies, using the latest Techniques. Civilization Progress — Yes! But the progress of culture? Funny. We Took It, loved my, horribly, “wrote Captain Pilecki in 1945 in the report.

He Described his time in the Auschwitz-Birkenau concentration camp. Michael Schudrich, Chief Rabbi of Poland, described the heroic deeds of Witold Pileck in the following words: “This Is an example of unimaginable good in a time of unimaginable evil. There Is more and more evidence of how Poles helped the Jews during the Holocaust and paid for their own life. You have to follow the example of people like Pilecki wherever evil is happening today. “