/ / Celebration of 100 anniversary of the restoration of Independence by Poland 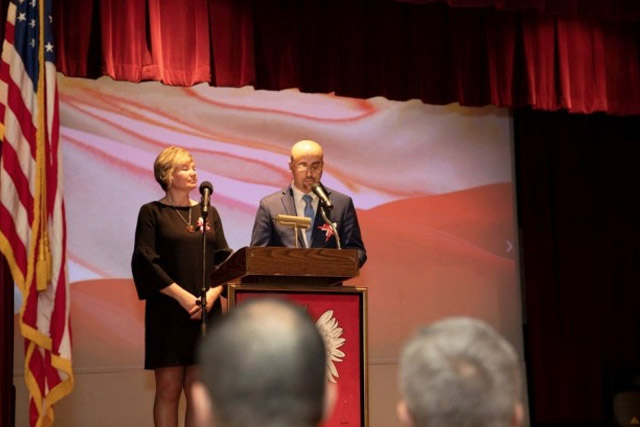 On Sunday, December 2nd, the Central celebration of the 100 anniversary of the restoration of independence in the Philadelphia agglomerations took place. All-Day event was the result of a joint work of a broad coalition of local Polish organizations: The Association of the House of Poland, the Smolensk Disaster Celebration Committee and the Katyn Genocide, the Philadelphia GP Club, the Kościuszkowska Foundation Philadelphia Branch, Good Name Reduty – USA, SWAP – District 10 (Facility 12 – Philadelphia, PA and 81 – Trenton, NJ), Polish Language Schools. Saint. John Kanit and ZHP Philadelphia – Bridesburg – Philadelphia.

The Solemn mass of the Event began with a Solemn celebration mass in the Church of St. John. The Mass was concelebrated under the guidance of priest Dr. Konstanted Pruszyński, Chapana of the facility 12. Association of Veterans of the Polish Army in America and other Polish organizations from Philadelphia. The post of the flagship SWAP, the Cadets of Pułaskiego and Scouts were Present. He Sang the choir to them. Marceli Kochańska-Sembrich and Parish Choir under the direction of Wojciech Holendra. After the masses, there was a short artistic part prepared by children from the Polish school at the local parish and scouts. Then moved to the Polish House (Associated Polish Home), which has been serving local Polonia for more than a hundred years. There were visitors from such distant cities as Washington, Baltimore, Boston and numerous guests from New York and New Jersey, as well as from Connecticut.

More than 300 people gathered In the banquet hall to watch the program consisting of speeches, lectures, projections and a rich artistic part. The Whole was led by Anetta Antoniak from the Smolensk-Katyn Committee/GP Philadelphia Club in Polish and in English by Andrzej Wiśniewski, chairman of the Polish House Association. The Hymos of Poland and the United States Were Sung, after which visitors and current organizations were welcomed. They were Then asked to get an instance.

Polish-American Threads The First occurrence was delivered by Deborah Majka, Honorary Consul of POLAND in Philadelphia. She Recalled Moments in history when the Polish and American nations helped each other achieve political goals. It also Drew attention to the contribution of US President Woodrowa Wilson to the regaining of independence by Poland in 1918, but the contribution of American aviators who created Kościuszkowska Squadron, which became the seed of Polish Sil Air. They Were made famous in the war with Russia from 1920, often with the greatest sacrifice. The consul has completed its occurrence, highlighting the unique relationship between our two peoples and wishing to remain so forever. He Then spoke to the consul Kamil Henne of the POLISH Consulate General in New York. He thanked the Polonia from Philadelphia for the preparation of the celebration, noting that the independence recovered by Poland after 123 years of bondage also worked for those who nursed the national values and communicated them to the next generations.

As another voice, he took the Executive director of the Polish-Slavic Federal Credit Union Bogdan Chmielewski. He Thanked the organizers for his effort in preparing the ceremony. He also Recalled that independence is not given once and for all and that we should take care of it and be willing even to fight it. The Credit Union was one of the main sponsors of Sunday events, as well as sponsoring many similar initiatives on the East Coast, admiring its role as a financial institution supporting the Polish community. It Can be said that without the financial support of this Organization the celebration of 100 anniversary of independence on the east coast of the U.S. would not be so huczne, Solems and sublime.

Congratulations from the Philadelphia authorities Folk Dance Team PKM invited guests to a common dancing polonaise. The Team has existed for 60 years. The 20TH century and it is in the Polish House is held his trials. Thanks to their presence of this beautiful patriotic tradition, which is polonaise, it has become an atonness. On behalf of the local authorities, the vote was taken by the Councilor Al Taubenberger, who read the resolution adopted by the City Council of Philadelphia, which congratulates the Polish Municipal Council on the occasion of the 100 anniversary of Poland’s restoration of independence and Marking, as the example of Poland teaches the rest of the world that freedom is the greatest value and you have to fight for it. The Text of the resolution also draws attention to the important role played by the Polish House Association in the life of the surrounding Polonia and the whole community of north-east Philadelphia. After reading the contents of the letter, the Countestperson handed it to the president of the Polish House. It Must also be added that an important visitor to these celebrations was the Honorary consul of Uruguay in Philadelphia.

Another Point of the programme was a lecture by a professor of political science at Holy Family University, Stephen E. Medveca, who presented a detailed chronology of the events of Poland’s restoration of independence in 1918 and the first four years of the SECOND REPUBLIC. He Stressed that the history of Poland from the years 1918-1922 is very complicated, but the spirit of the struggle for independence in Poles never dies, despite the opposition of fate. Common Story Last Lecture Fri “Independence of Poland over the centuries” was delivered by Tadeusz Antoniak, chairman of the Smolensk-Katyn Committee and the Club of the Polish Newspaper from Philadelphia and vice-commander Pl. 12 SWAP. He Pointed out that Poland had to strive for its independence continuously throughout the period of 1052 years of its history. With the most important examples of this, until 1918, when the thread of Polish-American cooperation in favor of Polish independence appears once again, the most eloquent example of which is the creation of more than 21.000 Soldiers of Polish volunteers from the USA and Canada, named after the color of the uniforms of the Blue army.

In history, this event is known as the American Polish Exomination Act, headed by Dr. Teofil Starzyński, later chief commander of the ZG SWAP. Cooperation continues and now when Poland is on the way to the creation of permanent bases of US troops as a component of defending its territory from external threats, and especially from the side of Russia. He also mentioned a contemporary example of this collaboration, the story of Michael Ollis, an American soldier who died in Afghanistan, defending the Polish soldier por. Charles Cierpica. At the end Tadeusz Antoniak initiated a symbolic transfer by their author Philip Ożarowski of historical books, talking about the seas made by Ukrainian Nationalists on the Polish inhabitants of Volyn, to the resources of the SWAP Museum. Cf. Filip Ożarowski is a veteran of the National Army, who served in the 27th. Wołyńska Infantry Division. He handed His books to the hands of the MJR. Wincentego Knapczyk, a veteran of the Battle of Monte Cassino and commander of the main SWAP.

It Was a beautiful meeting of the participants of the struggle for independence of Poland, on two different fronts. It Must be pointed out that despite the old century, the state of Knapczykowo came to this ceremony from Bridgeport, CT, and Mr. Ożarowski from Chicago. Heroes, it is worth noting that in the hall was present Helena Knapczyk, the spouse of wincites Knapczyka-Sybiraczka and Wymownie Auxiliary Corps Ladies, Mrs. Longina Dubiel, who as a child was injured by two occupants. The Soviet was murdered by her father, while the Nazis brought her together with her mother and siblings for heavy robots to Germany. The heroes of the anti-communist underworld were also Present after 1945:

The historical part there was an artistic part prepared by Danuta Misthal, and in it: Klaudia Wojnarska recited the poem of Konstant Ildefonsa Gałczyński Fri. “The Song of the flag”, Teresa Kozłowska – poem by Lech Makowieckie “Independa”, Jolanta Chojnacka recited the poem by Lech Makowiecki “Pedigree”, Kazimierz Kozłowski-poem by Jan Zamoyski “Such Will be Thingy”. The MKS Choir sang the songs “The first Brigade”, “Wojenko Wojenko”. PKM Folk Dance Ensemble presented dances: Kujawiak, Oberek, and Krakowiak. Soprano Marika Szczepek sang the song “To Poland was Polish” and, together with all the artists, the song “March, March of Polonia”. These celebrations will last in the memory of all participants for the long time.