/ / 37 Anniversary of the introduction of Martial Status 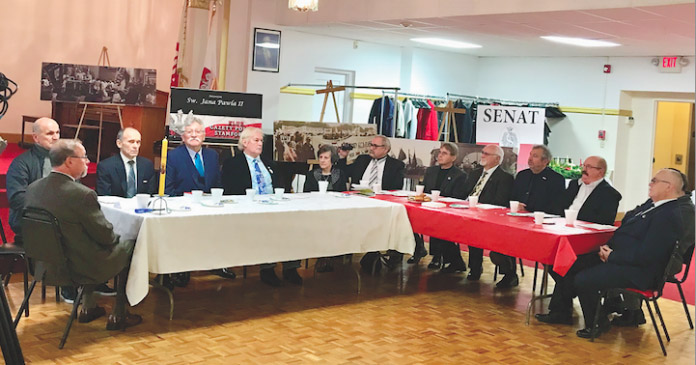 The Symposium was prepared at the initiative of Jerzy Polak – Chairman of the Club “Gazeta Polska” in Stamford – and the Patriotic Forum in Stamford in cooperation with the Committee of Celebrations of the Anniversary of the Smolensk Disaster and the Katyn Genocide, the Foundation The Clubs of the “Polish Newspaper” in the United States, the Reduta of the Good Name – USA, the Families of Radio Maryja and the Clubs “Gazeta Polska” from the east coast of the United States (NY, NJ, Boston, Philadelphia and Florida).

The Main organizers and leading symposium were: Jerzy Polak-Chairman of the Club “Gazeta Polska” in Stamford, CT, Krzysztof Sajdak-Chairman of the Polish Patriotic Forum in Stamford and Tadeusz Antoniak-chairman of the Club “Newspapers Polish “in Philadelphia and chairman of the Committee of the Celebration of the Smolensk Disaster and the Katyn Genocide in the American Czestochów in Doylestown, PA. Events December 70, June 76, the period of legal activities of the Solidarity NSZZ and the events of martial status reported participants, honorary guests – Witnesses of History. Documents and opinions of American historians were also Presented.

The Symposium was preceded by the solemnist Mass. by Fr. Paul Hrebenko, pastor of the Holy Name of Jesus in Stamford, in the concelebration of Fr. I have Come to the victims of martial health. The Heroes of these events, political Emigrants from various parts of Poland, from Podlasia to Silesia and from the Coast to Podkarpackie living in the USA, came to present a testimony of engagement in the fight against the communist regime, the repression and the wrongs which Experienced with their families, and to testify of the help of priests – chaplains of Solidarity, church hierarchies, with a special distinction from Pope John Paul II, which supported the freedom of the Poles. Made Available by the current symposium of Fr Paweł Hrebenko, the conference hall of the Church, with the exhibited collections of photographs, created a patriotic-religious climate, which recalled the memory, when religious Poles, also on the grounds, were crowded with churches. Before the official opening of the symposium was announced the result of the elaborate competition on the Most Prominent Pole 100 The anniversary of Independence of Polish American and Canadian Polonia.

On behalf of the patriotic-independence communities of the USA and Canada officially announced the accumulated result of the founder of the plebiscite Jerzy Polak with Jacek Szklarski from Reduta Good Name-USA and coordinator of Clubs “GP” in the USA and Canada Maciej Rusiński. The Winner of the competition with great advantage was Pope saint. John Paul II. On behalf of THE organizers Tadeusz Antoniak welcomed the honorary guests: Priest Paweł Hrebenko, Father Thomas Przywas, deputy consul of the Republic of Poland in New York, Matthew Gmur, Halina Szeligowski-Chairman of the Committee of the Regiment of Pulaskiego in Stamford, and Jan Orzechowski- President of the Holy Name Athletic Club in Stamford. He welcomed the Witnesses of History and all the participants of the symposium. A Surprise was the attempt to call the phone with Minister Antoni Macierewicz, who intended to direct a special message to his friends from the conspiracy. In the End, the minister sent SMS by phone. He Submitted all Christmas wishes and asked for support for the degrading of the WRON criminals, as well as support for the work of the Smolensk Commission. Maciej Rusiński – Coordinator of the Clubs “Gazeta Polska” in the USA and Canada – together with the head of the Club “GP” in Stamford Jurkiem Polak announced that from this point KGP Stamford will bear the name of St. John Paul II.

The main Part of the symposium began with inflammation of the Light of Liberty (in commemoration of the action initiated by President Ronald Reagan in the White House in 1981). The Candles ignited the wife of Boleslaus Plewy Zofia, accompanied by the current wives of the activists NSZZ Solidarność. Krzysztof Sajdak, chairman of the Patriotic Forum in Stamford, has read in his paper the participants with the history of Polish uprisings. Film Relationship Prof. Kramer’s Name from Harvard University helped to understand the role of St. Pope John Paul II and priests of Solidarity chaplains. Ks. Jerzy Popieluszko headed the uprising and the course of the social movement Solidarity. Reconstructed video lecture by Prof. Igor Lukes of Boston University has read all of the roles of intelligence associate in the NRA in the formation of the democratic opposition in the second half of 70 years. Ub. Century, headed by Antoni Macierwicz in the creation of opposition structures.

Participants could also see the written relationship between Thomas Simons, former US ambassador in Poland and President Reagan’s administration, about the US government’s strategy to impose economic sanctions on SOVIET and PRL governments. Then they performed Witnesses of History. Włodzimierz Ilnicki – Vice-chairman of the Strike Committee of December 1970 In Gdynia, arrested and evicted by the communists. His activities in favor of free Poland he was awarded the Cross of Freedom of Solidarity and the Pro Patia Medal. Stanisław Pyśk was Then a participant in the strike in Ursula in 1976, then a member of the NSZZ Solidarność, interred and repressed in martial law.

The Story of his struggle with the Communist regime was told by Wieslaw Wierzbowski, an activist of Solidarity with Szczytna, now living in Boston, MA, co-founder of the NSZZ Solidarność at Unitra-Cemi in Szczyslno. Arrested in the martial art, after his release he tried various forms of anti-regime activity, but he was tracked, inquigated, persecuted, and during the arrest incited under threat to exile, in 1983. decided to leave the United States. Another Witness of History was Bolesław Plewa, currently living in Philadelphia activist NSZZ Solidarność with Dąbrowa Górnicza, employee of the Uncle mine in the years 1971-1976, internalized in the state of war; Arthur Opolski of These-Ledzin – interned, imprisoned and stalking in the state of war; Paweł Grzegorczyk – Member of the strike committee at the Factory of Vans in Nysie, from the election of a full-time member of the Board of NSZZ Solidarność Earth Solidarity, intered, bulled and persected in the state of war, now chairman of the Club “GP” in New Jersey and member of the Smolensk-Katyn Committee in the American Częstochowa and vice-chairman of the Sokołów Nest No. 17 in Newarku, NJ; Ryszard Maciejowski-A well-deserved activist of the Solidarity structures of the Małopolska Region, member of the Board of the MKZ NSZZ Solidarność in Jasło, the originator and co-organizer of the unveiling of the plate. Ks. Jerzy Popieluszki, an intered and established criminal in the state of war to the Punious military service in Red Borze; Marian Czarnecki of the National Energy Commission Solidarity; Kazimierz Szmigiel of Bielska-Biała, Prisoner of War – 5 years for opposition and Democratic-independence activities in the state of war; Grzegorz Michalski from New Jersey, activist of the NSZZ Solidarność from Poznań, former member of the Board of the Wielkopolska Region of Solidarity in Poznań, intered and repressed in the state of war, then awarded the Cross of Freedom and Solidarity and the Badge for Merit to Independence; Adam Stepien, the activist of NSZZ Solidarność with Lublin, is harassment and beaten during the martial art of ZOMO, now a member and activist of the Families of Radio Maryja and the Smolensk-Katyn Committee in the American Czestochów; Tadeusz Wojton – Activist of THE NSZZ Solidarity Region Carpathian; Wojciech Mazur – The youngest of the participants (b. In 1964), who presented himself as an activist of the Gdansk Resistance “Generation” Speaking of printing activities, and Janusz Kudełko, activist of the NSZZ Solidarność in the FSM in Bielsko-Biała, arrested and imprisoned in the state of war in Kraków on Montelupich. Jerzy Polak At The end – leader of the strike on December 14, 1981. In the mixed OBR “Gamrat Erg” in Jasło. Kicked out of work with a “wolf ticket”, he co-organized a distribution group and assisted in the organization of silk-screen printing. He was a photographer of Solidarity. In 1983 he was arrested and imprisoned. The participants of honorary guests – Witnesses of History – ran out of the sick Lech Sobieszka from Boston, a member of the MKS Bureau in Gdańsk in August strikes 1980. On the Coast, a signatory of the Gdańsk Agreement of 31 August 1980, member of the Bureau of the Icz solidarity Corps in Gdańsk, and then a member of the Bureau of the Regional Board of Solidarity in Gdańsk and a delegate to the National Congress of the NSZZ Solidarność. After the Witness of History, Tadeusz Antoniak Read the proposal of the two resolutions of the Symposium: the first concerned the unique role of the Church in the fight against Communism, the second – a special treatment of the activists of the anti-Communist period of martial arts On the model of the law brought to the SEJM by Józef Piłsudski concerning the insurgents of January.

After acceptance of the symposium, the resolution was handed over to the consul Mateuszowi Gmasonry with a request to submit to the legislative and executive authorities of the Republic of Poland. In The Conference Room Symposium was presented a collection of photographs from the martial art by Jerzy Polak and exhibition “Poland Lonely Mission”, prepared by the Director of the Chamber of Memory of Gen. Ryszard Kukinski, Philip Frąckowiak, whose great presentation took place recently at the House of Commons in London for British parliamentarians.

Tadeusz Antoniak thanked the heroes – Witnesses of History – for being able to “shed his fate on the pile” without giving himself to the moral backbone, realizing the call: God, Honor and Homeland, as well as their great predecessors in the 1052-year history Our homeland. He Stressed that the state is as strong as the elite of this state. Turning to the Witnesses of History, he said: “You are precisely this elite, an elite who fought with Communist domination in Poland.” He Added that he was proud that it was once again possible to prepare an important historical event in the implementation of the historical policy of the POLISH authorities under the motto of the Smolensk-Katyn Committee: “We are Building a Common Patriotic Front – Polonia Semper Fidelis”. It Should also be mentioned that the Smolensk-Katyn Committee also presented the exhibition “One Million for the Ocean”, which was prepared by Baryja Garba from the Museum of World War II in Gdańsk.