/ / The National Day of Remembrance of the „Cursed Soldiers” 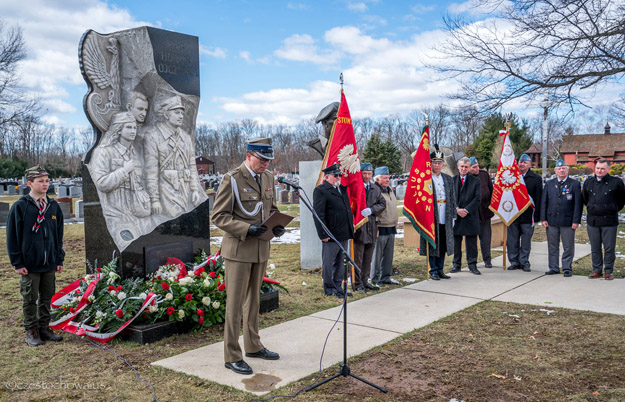 On the first day of March, for several years, in Poland, the National Remembrance Day of the “Cursed Soldiers” is celebrated. The memory of soldiers of the anti-communist and pro-independence underground of the Polish State is preserved not only in our homeland but also abroad, in the United States, especially among the Polish diaspora.

On this occasion, on Sunday, March 4, 2018, the Day of Cursed Soldiers in American Częstochowa was held, Doylestown, PA, organized by the Katyn Committee for the Smolensk and Katyn Genocide Celebrations and the Polish Army Veterans Association (SWAP) in cooperation with the Pamięć.us Association. at 11.00 at the churchyard, where there is a monument commemorating the Wyklętych-Niezłomnych soldiers.

This monument was officially unveiled in 2016 by the President of the Republic of Poland Andrzej Duda. This year’s meeting was filled with occasional speeches, prayer for the dead and the call of the fallen. The following spoke: Tadeusz Antoniak (chairman of the Smolensk-Katyn Committee), Antoni Płotka (Commandant of the 10th SWAP district), Mateusz Gmura (Vice-Consul of the Republic of Poland in New York) and Colonel. Michał Sprengel (deputy Defense and Military Attache). Prayer for the fallen of the Cursed Soldiers was led by father Tadeusz Olzacki, Pauline. Wreaths were also laid at the Monument.

The second part of the celebration of the Cursed Soldiers Day took place in the Chapel of Our Lady of Czestochowa. During the Mass. at. At 12:30 we prayed for all those who died in defense of our Homeland, especially those who were persecuted by the communist authorities. The Holy Mass was presided over by Father Tadeusz Olzacki.

This year’s celebration of the Soldiers Day was also placed as part of the “Przystanek Historia IPN New York” meetings, organized by the Pamięć.us Association and the Institute of National Remembrance. It is a series of historical meetings with IPN educators and archivists organized for the Polish diaspora on the east coast of the USA.

‘Veterans Ripped Out of Death’ - a series of meetings between the Polish community and heroes of war missions in Afghanistan.