‘Veterans Ripped Out of Death’ – a series of meetings between the Polish community and heroes of war missions in Afghanistan.

/ / ‘Veterans Ripped Out of Death’ – a series of meetings between the Polish community and heroes of war missions in Afghanistan.

‘Veterans Ripped Out of Death’ – a series of meetings between the Polish community and heroes of war missions in Afghanistan. 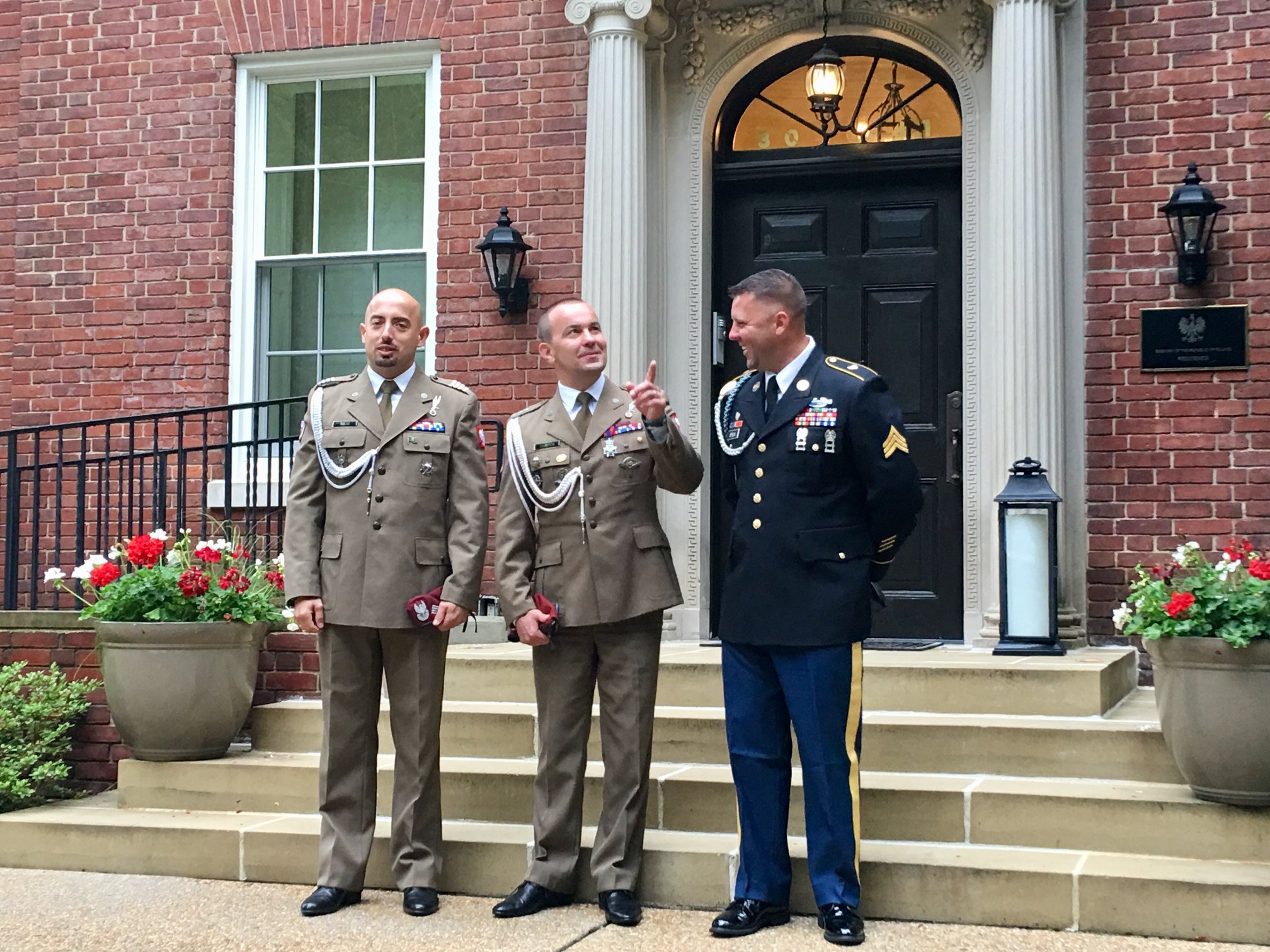 Between June 8-14, 2019, a series of meetings with veterans serving on war missions in Afghanistan took place on the East Coast of the United States. The meetings were organized by the Committee for the celebration of the Smolensk Catastrophe and Katyn Genocide in American Częstochowa. Special participants in this project were the protagonists of the series “Veterans Ripped Out of Death”; directed by Grzegorz Zasępa: Lieutenant Karol Cierpica, former soldier of the18th Airborne Battalion in Bielsko-Biała, platoon officer Marcin Kulas from the 6th Airborne Brigade in Kraków, and sergeant Corey Speck from the Georgia Army National Guard, as well as the director of the series himself.

The visit began with a ceremony on Staten Island, NY, where the sgt Michael Ollis’ family received from the Pentagon the ‘Distinguished Service Cross’, the second-highest military award that can be granted to a soldier of the US Army The award was given by Deputy Chief of Staff, General James McConville, to the father and sister of the fallen soldier (Robert Ollis and Kimberly Loschinvo). The ceremony took place in the symbolic place of the war veterans’ facility named after Sgr Michael Ollis. Sergeant Ollis was a 24-year-old infantry soldier of the 10th Mountain Division of Fort Drum in New York and was killed in action, on the 28th of August 2013,  protecting the Polish soldier, Lieutenant Karol Cierpice from the suicide bomber in the province of Ghazni in Afghanistan.

The culmination of the celebrations honoring the fallen soldier was the “Race in Memory of M Ollis” (5 kilometers), which is already cyclical on the Staten Island NY. This year however, in addition to the already large Polish community, in the event participated also representatives of the Committee for the Celebration of the Smolensk and Katyn Genocide Anniversary, members of the Club of the Polish Newspaper from Philadelphia, as well as special guests who came from Poland, i. e. our Polish soldiers. Between the 10th and 14th of June, the American Polonia had the opportunity to participate in several meetings during which two episodes of the new documentary series ‘Veterans Ripped Out of Death’ were presented. The protagonists of these two episodes are Polish soldiers who were wounded during the mission in Afghanistan, and their lives were saved by their allies – the soldiers of the American army.

The first episode is entirely devoted to the story of the sacrificial saving of the life of the Polish Lieutenant Karol Cierpica, whom Michael Ollis shielded with his own body from the assassin –dying on the spot. The episode ends, despite the tragedy, with an optimistic punch line, as Lieutenant K. Cierpica decides to name his newborn son Michael, in honor of his savior. And as the parents of sgt M. Ollis, Linda and Robert Ollis, find out about it, they say, ‘God took our son away from us, not to leave us empty. In his place, he gave us a new family of Karol and new motherland of Poland.’

The second episode of the series was devoted to the history of platoon leader Marcin Kulas, and sgt Corey Speck. The fate of these two men intertwined in no less dramatic circumstances, in September 2009 in Afghanistan, in the province of Ghazni. An eight-person Polish patrol, commanded by Corporal Marcin Kulas, was summoned to support the American soldiers under fire from the Taliban. During the incident, Sergeant M. Kulas was wounded. It was sgt. Corey Speck who gave him the first aid and carried him out from the back of the battlefield. They would most likely both have died if it weren’t for Speck’s last sgt grenade, which was used to destroy a Taliban sniper shooting at them.

After ten years, the soldiers met in Prague to celebrate the 20th anniversary of the Polish, Czech and Hungarian presence in NATO. Sergeant Major M. Kulas speaks in the film with great emotion: ‘I was born again then. Now my dreams have come true. I have a wife and three sons, and Corey has become my brother.’ Out of a total of 26,000 Polish soldiers who had served in Afghanistan, 44 have died and 360 have been injured. The series uses unique action pictures, private photos of the war heroes and films made for the army. In Poland, the series has reached 72 thousand viewers.

After the episodes had been broadcast, it was time for the audience to ask questions. An important question that appeared at each of the meetings was the question about the purpose of such war missions. Lieutenant K. Suffering answered: ‘Our missions are needed not only in a state of real war, they are important because war is now a fight against human trafficking, illegal trafficking in human organs, massive drug trafficking and weapons. Thanks to war missions, this practice has been significantly reduced and in some regions completely eliminated.’ Platoon Marcin Kulas also added: ‘As a professionally active soldier, I can confidently say that military missions also allow Polish soldiers to come into contact with the highest class of military equipment. In ordinary barracks there is no such possibility yet. For this reason, missions enable us to get to know the highest defense technology.’

The screening of the series ‘Veterans Ripped Out of Death” coincided with the visit of the President of the Republic of Poland Andrzej Duda to Washington on June 12th. The visit was of great importance for the defense of Poland, therefore the Clubs of Gazeta Polska, together with several other organizations such as Federation of Polish Americans, Smolensko-Katynski Committee, Polish-American Congress, Polish Army Veterans Association, Coalition of Polish Americans, Polonia for Poland, Pulaski Cadets, decided to support the visit. What is more, a demonstration was organized in support of the Polish authorities’ actions in the field of strengthening cooperation with the United States at the military level. About 150 people came with banners and flags of both countries. President Andrzej Duda unexpectedly appeared among the demonstrators and thanked the Polish community for so much support. The final decisions made by the Presidents of the USA and Poland were to increase the ethe number of American troops in Poland and to purchase the latest generation of F-35 fighters for the Polish army.

The culmination of the meetings with veterans and the presentation of the films from the series ‘Veterans Ripped Out of Death”; was organized at the Polish Ambassador’s Residence in Washington on 13 June 2019. Apart from special guests, the meeting was also attended by the Minister of National Defence of the Republic of Poland, Mariusz Błaszczak. There was also a large representation of Polish and American soldiers. The meeting was chaired by General Cezary Wiśniewski – Military Attache in Washington.

After the film was broadcast, there was time for reflection, which was shared by Minister M. Błaszczak. At the end of the meeting, on behalf of the Committee for the celebration of the Anniversary of the Smolensk Catastrophe and Katyn Genocide, Tadeusz Antoniak – Chairman and Jacek Szklarski (representative of the Good Name Redoubt) presented the Minister of National Defence with a commemorative gutter with the image of the monument to the Invincible Soldiers from American Częstochowa. It should be emphasized that the Committee presents gutters to persons and institutions for their contribution to the Polish cause.

Thanks to the promotion of the series ‘Veterans Ripped Out of Death’ Polonia has become aware of the true Polish-American Brotherhood of Arms ‘Poland and USA Brothers in Arms”.

All the events described above were possible thanks to the sponsors: Polish Slavic Federal Credit Union, District II Polish Army Veterans Association and the Foundation of Polish Newspaper Clubs.

See photos from ‘Veterans Ripped Out of Death’ – a series of meetings between the Polish community and heroes of war missions in Afghanistan.